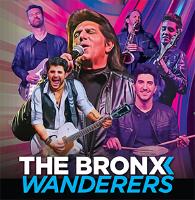 The Bronx Wanderers is a celebration of American rock and roll and the story of one musical family, told through their favorite songs (and yours) with plenty of laughs and memories along the way. For over a decade, the Adinolfi family has captured audiences of all ages from across the world.  The Bronx Wanderers include former record producer and family patriarch Yo! Vinny, his two multi-talented sons, Vin A and Nicky Stixx, plus three of the most talented musicians who just happen to be their high school friends.  Together, they take you on a musical, comedic and heartfelt journey through music’s biggest and most recognizable hits with great insider stories from Yo! Vinny’s 35-year career as a record producer, label executive and music publisher. This is a virtual broadcast of their full show from Las Vegas.

The Bronx Wanderers show is high energy showmanship at its best, featuring non-top hit after hit from artists such as Frankie Valli, Dion, Neil Diamond, Elvis, Billy Joel, Queen and Bruno Mars, just to name a few.  Truly a show for everyone of all ages, The Bronx Wanderers have played over 1000 shows on the Las Vegas strip, have been awarded “Best of Las Vegas” 3 years in a row, and have always been in the top ten of 188 shows in Las Vegas.

Admission:  Pay What You Choose (Starting at $10)
All tickets must be purchased in advance via the internet ticketing systems for this performance.