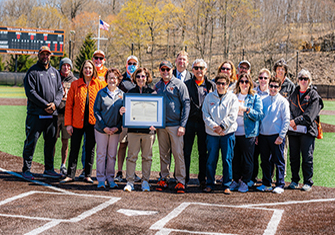 Athletic Director Emerita Sabrina Grant was honored by friends and colleagues, including President Helldobler, prior to the Pioneers' baseball doubleheader April 30. 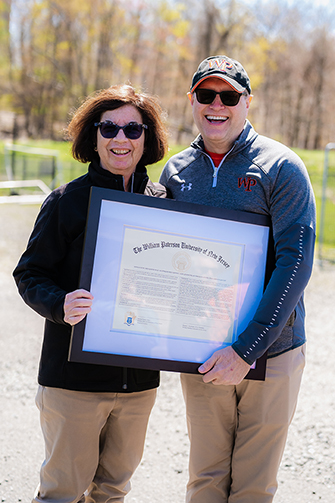 Sabrina Grant, who recently retired after contributing nearly four decades of athletics leadership to the William Paterson University campus, has been honored with the title of Athletic Director Emerita by the WP Board of Trustees. She was honored at a ceremony prior to WP's home baseball doubleheader April 30.

“I am pleased that the Pioneer community is able to honor Sabrina Grant in this special way,” said William Paterson President Richard J. Helldobler. “The title of ‘Athletic Director Emerita’ recognizes her decades of dedication to WP student-athletes and the campus community. She has done so much to build successful intercollegiate sport programs of which we can all be proud.”

Grant was present for many exciting times at William Paterson, including the 1992 and 1996 baseball national championships and the 2001 men's basketball national runner-up finish. The Pioneers made 70 NCAA Tournament appearances and won 26 New Jersey Athletic Conference (NJAC) titles during her tenure while she made her mark on every part of the department, including operations, student-athlete support, budget, scheduling and staffing. Among her notable accomplishments were the establishment of the Faculty Athletic Support Team (FAST) in 2013 and the Student-Athlete Mentors (SAMs) program in 2019.

Grant's impact on the Pioneers' facilities will be one of her lasting legacies, as she spearheaded four construction projects since 2003 that created brand-new practice/competition sites for the baseball, field hockey, football, tennis and men's and women's soccer programs. She also was key to important upgrades made to the sites used by WP's volleyball, men's and women's basketball, softball and men's and women's swimming and diving teams.