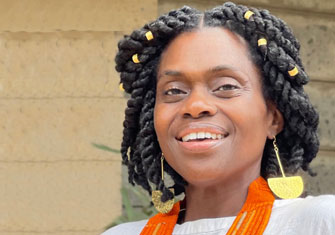 William Paterson University Professor of Educational Leadership Darlene Russell has been selected to serve as editor of an academic journal that recognizes, celebrates, and propagates the work of scholars of the African diaspora around the globe, ProudFlesh: The New Afrikan Journal of Culture, Politics, & Consciousness.

“As a child, my affinity for and knowledge of Africa was ignited by my father. My father was my first history teacher elucidating Africa’s greatness and pulchritude while eviscerating the world’s atrocious narrative of it. From this foundation, my interest in and understanding of Africa grew personally and professionally,” Russell explains, of how “natural” it was for her to accept the invitation to serve as editor of ProudFlesh, which falls right into her pedagogical approaches and research agenda, which is focused on critical race theory, culturally responsive teaching, and Black feminist epistemologies.

Russell is also the founder of the Nurturing Culturally Responsive Equity Teachers (NCRET) Project, which focuses on implementing a culturally responsive and anti-racist curriculum in secondary classrooms. She and NCRET scholars have presented at national conferences in over 15 states. She is also the founder of My Sisters’ Nest, a mentoring group for female college students from underrepresented groups.

A Fulbright Scholar, Russell was named Educator of the Year in 2020 by the New Jersey Council of Teachers of English.

“My self-imposed obligation as an African-American woman is to leverage the scholarship of Black women in higher education, which will remain my fundamental focus,” Russell says of her new role with ProudFlesh. “It is the intellect of and research on Black women that continues to cultivate the soil of higher education that folks in the academy and throughout the globe benefit from.”