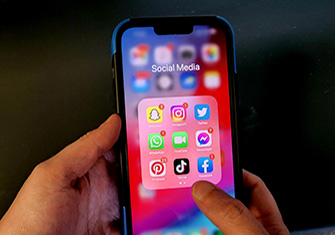 Amid growing concerns about adolescents’ mental health in the wake of the COVID-19 pandemic, a new research study led by William Paterson University Professor of Public Health Corey Basch met today’s teens where they are: on the increasingly popular social media platform TikTok.

In the study, published by the Journal of Medical Internet Research (JMIR), Basch and her co-researchers deconstructed the content of and reactions to 100 TikTok videos posted with the hashtag #mentalhealth—videos that collectively received nearly 1.3 billion views, 2.7 million “likes” and 2.5 million comments—and found that almost half reported or expressed symptoms of mental distress.

That percentage, the researchers say, is alarming. Not only does it point to an existing public health problem, but it also points to the problem’s potential to get worse. Adolescents are TikTok’s primary users, and that age group typically spends a great deal of time on social media overall, the researchers explain. Repeated, prolonged viewing of TikTok videos about traumatic events could subsequently have a ripple effect on adolescents that contributes to higher rates of poor mental health.

“During the pandemic, social media served as a replacement for many in-person activities that were halted, offering people the ability to remain somehow socially active and feel less isolated,” Basch says. “However, there is a concern that the solitary activity of social media use has left adolescents increasingly isolated and less likely to engage in interactive experiences with peers.”

On a brighter side, researchers found that 61 percent of comments on their #mentalhealth video sample offered messages of support or validation, typically from users who allegedly have shared experiences or trauma. This points to TikTok as a possible “just-in-time” source of social support and personal validation, the study says—one “that is made available without the need for planning, scheduling, and financial renumeration.”

However, only 16 percent of the video comments analyzed in the study shared coping strategies, experiences of healing, or ways to feel better.

“Though the observations in this study revealed that those writing about mental health received a great deal of support and validation—raising awareness and decreasing stigma—the lack of health care professionals involved in these conversations is of concern,” Basch says. “Adolescents could be turning to TikTok as their only source of support, and the advice there is largely driven by users’ conversations.”

Health care professionals providing intervention to users on TikTok, the study concludes, might be very beneficial and warrants additional research.

Basch conducted the study, titled “Deconstructing TikTok Videos on Mental Health: Cross-sectional, Descriptive Content Analysis,” with Lorie Donelle, of the Family School of Nursing at Western University, in Canada; Joseph Fera, of the mathematics department at Lehman College of the City University of New York, and Christie Jaime, also a professor in William Paterson University’s department of public health.

“On one hand, as we found in our research, TikTok can be a form of social support and connectedness,” she explains. “On the other, because use of social media technology often replaces time spent performing other interpersonal, physical, and overall fulfilling activities, it can make one feel incredibly isolated and alone.”