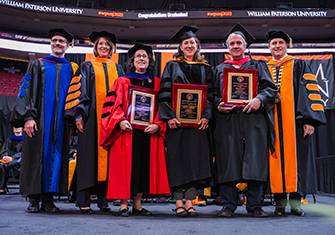 Miryam Wahrman, professor of biology, Nicole Davi, professor of environmental science, and Richard Kearney, research and electronic resources librarian, were recognized during the University’s 2022 Undergraduate Commencement Ceremony on May 18 as the recipients of the 2022 Faculty Excellence Awards.

Wahrman was honored for her exceptional passion for teaching and dedication to her students, successfully preparing them for careers in science and health. A member of the faculty for 37 years, she has taught 17 different biology and biotechnology courses for majors and non-majors, many of which she developed, including a course in bioethics, and has taught Honors courses and the First-Year Seminar. She also created and developed the University’s bachelor’s and master’s degree programs in biotechnology. Her extensive involvement in campus initiatives includes serving as director of general education for 12 years, guiding development of the core curriculum. Wahrman’s research, supported by grants from the National Institutes of Health, among others, and published in numerous scientific journals and conference proceedings, has provided opportunities for students in her lab to pursue significant research projects, preparing them for graduate school and careers in medicine, academia, and industry. She also directed a U.S. Department of Education Math and Science Teachers Grant focused on improving the teaching of math and science in urban schools. Wahrman has served as chair of the Department of Biology, chair of the Faculty Senate, and director of the Center for Holocaust and Genocide Studies, which she co-founded. Her publications include The Hand Book: Surviving in a Germ-Filled World, instrumental during the COVID-19 pandemic, and Brave New Judaism: When Science and Scripture Collide. She has delivered more than 100 conference and scholarly presentations and invited lectures around the country and abroad, including a TEDx talk.

Davi, who joined the faculty in 2013, has produced a body of impressive scholarship and led her students in cutting-edge research and publication. Her research, focused on the development and interpretation of tree-ring records to describe climate variability across times scales from years to millennia, is critical to understanding the impact of climate change change on populations and ecosystems. The tree-ring records she has developed, along with her students, document nearly a thousand years of droughts across Asia and warming trends across the Northern Hemisphere. Locally, Davi is studying how New Jersey and New York coastal forests have responded to climate extremes in the last three centuries. The author of nearly 60 peer-reviewed papers in quality journals, she has also authored many published abstracts with her students as lead authors or co-authors. Davi has been awarded more than $3 million from federal and private funding agencies for projects from paleoclimate research to science education to collaborations with artists, including a recent National Science Foundation grant aimed at building research capacity and partnerships for students and faculty at minority-serving institutions. Passionate about science education, she led a research team that built Tree-Ring Expeditions (TREX), public online labs that introduce undergraduate students to tree ring science. Her awards include selection as a 2020 Fulbright Scholar to conduct research in Colombia. The associate editor of Dendrochronologia and a reviewer for other journals, she serves as chair of the Department of Environmental Science and is member of the N.J. Science Advisory Board’s Climate and Atmospheric Sciences Standing Committee for the N.J. Department of Environmental Protection.

Kearney was honored for his many years of exemplary service to the University in the areas of library database acquisitions and Faculty Senate policy making, as well as to the state and community at large. In his 22 years at the University, Kearney has worked to acquire a vast collection of databases for teaching and research, enabling high-quality instruction and scholarship for both students and faculty. Committed to making open educational resources accessible for the campus community, he was instrumental in helping faculty and students with needed electronic information during the shift to online learning during the COVID-19 pandemic. As one colleague noted, “his service has enriched everyone here on campus.” Kearney has served as a member of the Faculty Senate and its parliamentarian, and is a long-time member and chair of the Senate’s Academic Standards Council, playing a leading role in drafting and revising policies. On the state level, he is the chair of the VALE Purchasing and Licensing Committee, a member of the New Jersey Statewide Database Advisory Committee, and a member of New Jersey’s Library Services and Technology Act Advisory Council. He has served as president of the College and University Section of the New Jersey Library Association, and received its highest accolade, the Distinguished Service Award. An adjunct professor of history, Kearney has served as a reviewer for the state’s History Re-grant Program for Passaic and Morris counties.