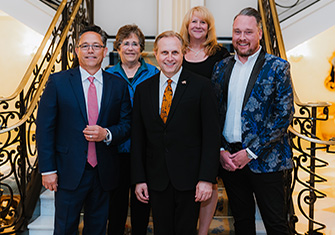 From left are Geraffo, Levitan, President Helldobler, and for Withum, Maureen DiCicco '87 and Bill Bradshaw 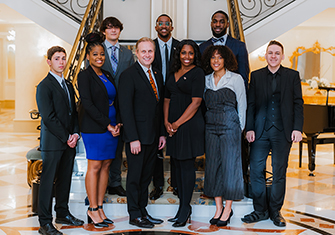 The 2022 Legacy Scholars: standout students who have reached new heights thanks to scholarship support

All net proceeds from the Legacy Awards Gala, held at The Grove in Cedar Grove, New Jersey, fund academic scholarships at WP, thereby directly affecting the lives of students—"enabling and empowering them to earn their degrees and do great things,” says University President Richard J. Helldobler.

During the event, distinguished alumnus Geraffo, and his wife Daria, made a $50,000 commitment to fund additional scholarships—ones that are specifically focused on juniors and seniors who are struggling to remain enrolled at WP due to financial issues. It is Geraffo’s hope that his scholarship support will help such students stay the course so they are able to graduate with the bachelor’s degree they set out to and deserve to attain.

“William Paterson University truly changed my life and gave me the foundation upon which I was able to build professional and personal success in my dream technology career,” says Geraffo, a first-generation college student who paid his own way through WP and “found his calling” here. Originally a criminal justice major with hopes to work for the FBI, Geraffo was inspired to switch his major to accounting, and subsequently landed two internships with IBM just as the PC revolution began. He has spent the past 30 years transforming global business in key executive roles with companies such as Amazon, Oracle, Hewlett-Packard, and IBM.

Noting the William Paterson University Foundation’s work to help struggling students persevere and “finish strong,” Geraffo adds, “I want to pay it forward and help others pave their path in life.”

Tanasia Weaver ’22, a Dean’s List student with a double major in secondary education and English and a minor in special education, was one such struggling student. She has received two donor scholarships through WP—the OritaniBank Charitable Foundation Endowed Scholarship and the Arlene Siver Pampinella Memorial Endowed Scholarship. Weaver served as the evening’s Legacy Scholar speaker.

Weaver grew up in a single parent household, works multiple part-time jobs while attending WP fulltime, and her mother worked three jobs at once to help her and her brother receive a college education. Both she and her mother lost jobs during the height of the COVID pandemic, “and it came to the point where I had to consider whether to work fulltime or complete my degree,” Weaver told the crowd. Then, she applied for a donor scholarship and received not one, but two financial awards.

“I look forward to being able to give back to my community once I start my career teaching, and be a part of rewarding another student with the same generosity that was given to me,” she added.

Weaver is currently a teacher-in-training in the Paterson Public School District, where she has taught several grade levels both in special education and general education. Her students have thanked her for the academic and personal lessons she has taught them, and some have become inspired to become first-generation college graduates just like her. Those experiences have “affirmed the impact that I can make as a teacher,” Weaver said. The opportunity to change a student’s life for the better “is a reward one holds onto for a lifetime.”

“I’m forever grateful for the scholarships that are making my dream come true,” she added.

Each year, the University provides more than $11 million in scholarship support for students. More than $1.4 million of that total was provided by generous donors this year, allowing WP to bestow more than 650 donor-funded scholarship awards.

“We’re grateful for the opportunity to highlight our loyal and supportive alumni, friends, faculty and corporate partners,” says Pam Ferguson, president of the William Paterson University Foundation and vice president for institutional advancement.  “On behalf of the entire University community, I thank them for their partnership, leadership, and friendship — and for supporting our students.”