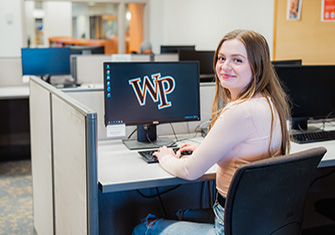 Anna Chieco ’22, of Stanhope, New Jersey, is making waves. She is 4.0 student majoring in computer science, which is, nationally, a male-dominated field.

Chieco, who wants to work in web development and would love a position that also includes a database management component, credits the support of William Paterson University’s MaCS (math and computer science) Scholars Program for giving her the courage to “overcome the odds.”

“I would feel isolated sometimes as a woman in this field,” Chieco says. “Being in the MaCS Scholars Program, though, made me feel like I wasn’t going through it alone. I had people in my corner. The recognition and support—I have been so grateful for that.”

Funded by the National Science Foundation, the MaCS Scholars Program at William Paterson University was created in 2020 to assist undergraduate mathematics and computer science students with culturally responsive mentoring, scholarships, research opportunities, internships and mentorships. Overall, the program aims to contribute to the national need for well-educated scientists, mathematicians, engineers and technicians.

Through the MaCS Scholars Program, Chieco was paired with faculty mentor Professor Cyril Ku, and performed research with him over the summer on a project rooted in data mining and analysis. Chieco had to learn the Python programming language in order to complete the work she was charged with in Professor Ku’s lab: testing open source APIs (Application Programming Interfaces) on social media, such as those that can automatically collect viewer comments on specified YouTube videos. It was a valuable hands-on learning experience, Chieco says.

She also enjoyed a summer book club through the MaCS Scholars Program, which gave her the opportunity to meet with and talk to fellow scholars. “We got to have interesting, intelligent conversations,” Chieco explains. The book they read, What the Eyes Don’t See by Mona Hanna-Attisha, she added, was especially meaningful and inspiring to her as it focused on the author, a woman scientist, who fought to tell the truth about the Flint water crisis.

Chieco’s advice for other underrepresented students who may be considering a major in mathematics or computer science: “I would say if you’re passionate about it, it’s 100 percent worth the effort. It’s difficult, but good things are difficult. It helps a lot to find a group so you don’t feel alone, and for me, it was MaCS, and I’m sure MaCS will be that for many students after me.”

“Find other people going through similar things, and go for it.”