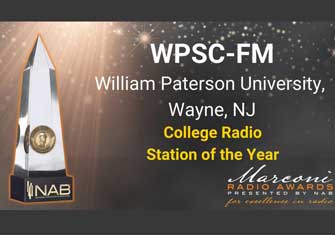 William Paterson University’s student-run radio station, WPSC-FM (88.7), has won the 2021 Marconi Award for “College Radio Station of the Year.” The prestigious Marconi Awards are presented by the National Association of Broadcasters to recognize outstanding achievement by radio stations and individuals.

The awards were announced on November 10 during the Virtual NAB Marconi Radio Awards celebration. In addition to WPSC-FM, other nominees in the category were WRHU-FM, Hofstra University; WMSC-FM, Montclair State University; WRRC-FM, Rider University; and WSOU-FM, Seton Hall University.

"I'm incredibly proud of the work we put in every year at WPSC,” says Sebastian Escobar, interim general manager of the station. “Our students know we have a big reputation to uphold, and they show incredible passion to maintain that. What we have here is something special, and we will continue to work keep improving every year in all aspects. I feel honored today."

On World Radio Day in February 2020, WPSC-FM became the first radio station to ever produce a live broadcast from the Marconi Museum in Bologna, Italy, the home where wireless radio was invented. During the trip, the station helped launch Outside Radio, a radio station by and for people with autism and other communication disorders located there in Italy.  Shortly thereafter, the COVID-19 pandemic hit. After a short shutdown, the station continued to stay on the air due to the commitment students and staff, relaying important health information to the community.

To see video about World Day Radio Day 2020, as well as the announcement of the Marconi Award, click here

"We believe that our historic trip to Italy, to launch Outside Radio in Bologna, on World Radio Day, in Marconi's house, where he invented wireless radio, definitely played a part in our win,” says Robert Quicke, professor of communication and faculty advisor to the station. “This award is truly deserved recognition for the students. It's been a tough time due to the pandemic, but their hard work and enthusiasm never diminished!"

WPSC-FM has won numerous accolades in the past decade. This is the stattion’s second Marconi Award and fourth nomination; the station won the award for “Noncommercial Radio Station of the Year” in 2018, a category that included other college and NPR-affiliated stations. The station has also been named Best Radio Station in the Nation (among institutions with more than 10,000 students) by the Intercollegiate Broadcasting System (IBS) four times since 2012.

Established in 1989 and named after inventor and Nobel Prize winner Guglielmo Marconi, the NAB Marconi Radio Awards are given to radio stations and outstanding on-air personalities to recognize excellence in radio.