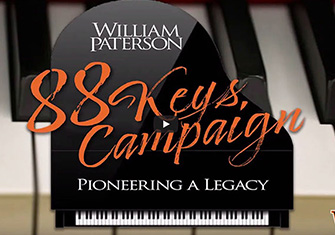 A video produced in support of the University’s 88 Keys Campaign to raise funds for a new Steinway grand piano has been awarded a 2021 Silver Award in the Non-Broadcast, General Fundraising Category of the 42nd Annual Telly Awards. Founded in 1979, The Telly Awards honor excellence in video and television across all screens in local, regional and cable television commercials as well as non-broadcast video and television programming.

Produced and written by Loretta McLaughlin Vignier, interim dean of the College of the Arts and Communication, the video features Bill Charlap, professor of music and director of jazz studies and an internationally known jazz pianist, as spokesman. Filmed at the Steinway & Sons facility in New York City, the video was edited by Communication Department alumna Colleen Lubisco ’07, MA ’09.

“This video production was a fantastic group effort in terms of script; video recording and audio sweetening by the Steinway & Sons in-house production team (Jon Feidner, Lauren Sclafani, and Melody Hwang) and use of their facility; our outstanding spokesman Bill Charlap; the wonderful editing talents of alumna Colleen Lubisco, and assistance from numerous other faculty and staff on campus,” says McLaughlin Vignier. “We produced this video to support an important campus fundraising project that will benefit our students, faculty, and the performing artists we bring here, and we are grateful for this recognition of its creative excellence.”

The 88 Keys Campaign was launched in fall 2020 to raise funds for the purchase of a new Steinway grand piano to support the Department of Music and the Shea Center for Performing Arts. The new instrument will replace the University’s current Steinway, now more than 40 years old. The campaign also seeks to provide resources for the piano’s maintenance.

The Telly Awards annually showcases the best work created within television and across video, for all screens. With more than 12,000 entries from all 50 states and five continents, Telly Award winners represent work from some of the most respected advertising agencies, television stations, production companies, and publishers from around the world. The Telly Awards recognize work that has been created on behalf of a client, for a specific brand and/or company, or self-directed as a creative endeavor. The awards are judged by members of the Telly Awards Judging Council, a group of over 200 working industry professionals and previous Telly Award recipients with demonstrable expertise in the categories they review.