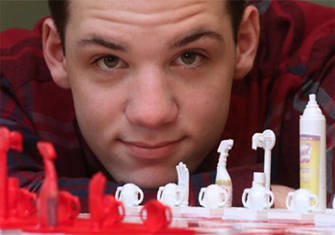 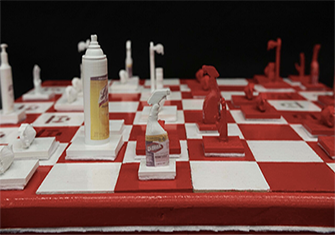 William Paterson University freshman Nick Montesano ’24 has taken classic chess pieces, such as the queen, bishop, and rook, and recreated them to incorporate the quarantine essentials of the pandemic.

Montesano’s idea stemmed from the final project of a 3D Design class with WP professor Henry Yoo. Yoo challenged his students to develop and present a themed chessboard that integrated 3D modeling and fabrication methods. After abandoning some earlier concepts, Montesano settled on an idea that would resonate with a larger audience.

“When the pandemic first started in March of 2020, everyone began to stockpile products out of fear,” adds Montesano, an art studio major with a concentration in industrial design. “My goal for this project was to take those concerns and add a humorous play in the hopes of changing the perception.”

Montesano, whose final project for class has been featured on major regional news websites  NJ.com and NorthJersey.com, hopes to file copyright and trademark rights and bring his idea to major toy companies. In the future, Montesano plans to bring his entrepreneurial mindset toward a career designing athletic and healthcare products, such as footwear and prosthetic legs.

But for now, the Roxbury, New Jersey native is focused on his college experience.

Though his freshman year has brought some unexpected challenges resulting from the pandemic, Montesano says he does not regret his choice to attend and live at William Paterson. “It was different, but it was successful,” he adds, of his first semester, as he gears up for the second. “I received straight A’s and built good relationships with my professors and fellow students.”