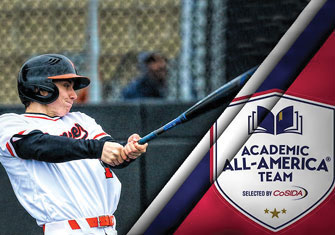 William Paterson junior outfielder Steven DiGirolamo, of Dumont, New Jersey, was acknowledged as one of the nation's most accomplished student-athletes on the diamond when he was selected to the College Sports Information Directors of America (CoSIDA) Baseball Academic All-America Third Team.

Inducted into Chi Alpha Sigma, DiGirolamo has been a Dean's List student every semester as a finance major, and earned a spot on the 2018-19 Academic All-NJAC Honorable Mention.

The award is only issued to the elite student-athletes in the NCAA, with Division III selections being divided into eight districts based on geographic location. In order to be eligible for the CoSIDA Academic All-District Team, student-athletes must have a minimum grade point average of 3.30 and must have already used at least one year of eligibility at their current institution prior to the 2019-20 academic year. First-team all-district honorees are then eligible for voting for the CoSIDA Academic All-America Team.