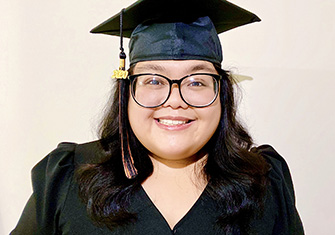 In 2020, University officials decided to rotate the selection of our undergraduate and graduate commencement speakers through William Paterson’s five colleges. Students were selected by their respective college deans from among the highest-achieving graduates. Pascual says she was ecstatic to learn that she was selected as the student speaker for the virtual ceremony, sharing, “It is an honor to be given the opportunity to speak to my fellow graduates.”

After completing her associate’s degree in fine arts at Bergen Community College, Pascual transferred to William Paterson, where she was a Dean’s List student throughout her time in Wayne. Proficient in several languages, including Tagalog, standard and Jordanian Arabic, Spanish, and American Sign Language, Pascual studied in Amman, Jordan in the summer of 2019 through the Council for International Education Exchange. She is a member of Sigma Tau Delta International English Honor Society, Pi Lambda Theta International Honor Society, and the National Society of Leadership and Success, and has been involved in numerous community service activities.

While many people guided Pascual during her undergraduate journey, she is especially thankful for the tutelage of Laura Fattal, PhD, an assistant professor in the Elementary and Early Childhood Education department, who first prompted Pascual to think about a career in education.

“Dr. Fattal was my first education professor,” said Pascual. “It was in her classes that I knew I wanted to be a teacher. She supported me from the beginning, including writing letters of recommendation and nominating me for the commencement speaker position. She has always been there for me.”

The recipient of the Weinke-Mault Scholarship, the Donald Duclos Scholarship, and the Muna and Basem Hishmeh Foundation Scholarship, Pascual plans to go into teaching at the secondary level upon graduation, but would like to one day complete a doctoral degree and become a collegiate educator.

For now, Pascual knows these times are undoubtedly different, but they do not cheapen the efforts of her peers: “The current state of now is temporary, but our accomplishments are forever.”